Lady reacts to an altercation between her little sister and an African woman who physically assaulted the young girl over disrespect.

In a viral video, a young girl had a heated argument with an African woman who condemned her for being rude.

Reacting to the argument, the sister of the young girl involved narrated how the fights  broke out as she sounds a note of warning to African parents on how they interact in the UK.

“This is actually my little sister. She was minding her business in the chicken and chip shop and this Aunty decided to get involved with her and her friends conversation and proceeded to slap her. Warn your parents, this isn’t Africa. You don’t go around slapping peoples Children. She has now been reported to the police and it’s is being taken further. Warn your parents not to move like fools on road cah they can me meet the wrong one. This ain’t Africa! KEEP YOUR HANDS TO YOURSELF KMFT,” she wrote. 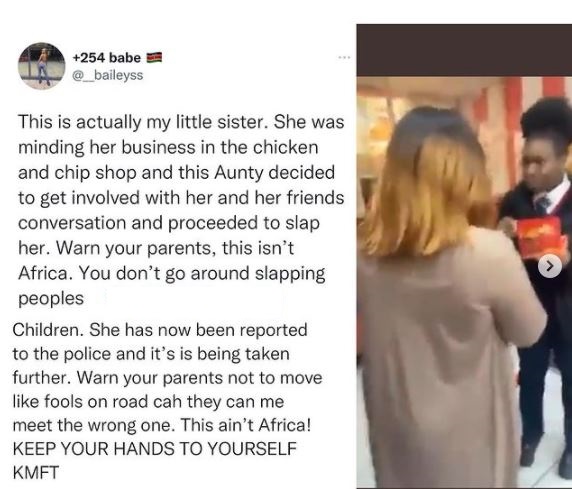 Watch the video below …

Amid rumours of failed surgery, Nina Ivy finally opens up on the reason she hasn’t flaunted her backside ever since her surgery

I’m not angry that pastors are wealthy, only angry at poor Christians — Daddy Freeze writes